Who's Calling? ... It's Stratford-upon-Avon, England!

Another month, another adventure! Keeping things local I chose to visit Stratford-upon-Avon to see what all the fuss is about. William Shakespeare, Britain's great poet and playwright was born in Stratford-upon-Avon during the Elizabethan reign of Queen Elizabeth I. Has this historical town being tarnished by the influx of tourists? How many delights did I see? Sure, lots and lots! 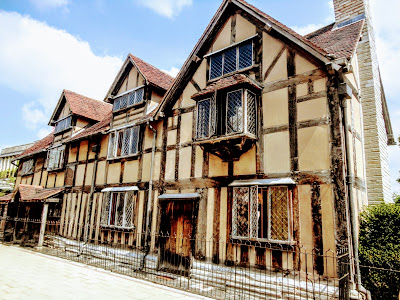 Looking over the privets of the main building it was easy to see that multiple houses were connected to Shakespeare's Birthplace, maybe buying a ticket to see behind the reservation desk may have allowed us to see more? Nevertheless, I know that seeing this sight the way I did was worth making a saving. I had only stepped from my London Midland train twenty minutes early with great expectation for my Shakespearean discovery. With Will's birthplace found I wanted to see the River Avon! Like already?! Feeling the vibe of Stratford's busy town centre I wanted to make the best of the sunshine conditions. The sea of American chat filled the main street in the heart of Stratford-upon-Avon, as a Brit it made me feel very proud because we can own William's Shakespeare's notoriety as a part of our history, plus Will still makes his contribution with all the tourists that visit that famous town! You should take a chance on Stratford-upon-Avon? You're very welcome! OK, let's go! 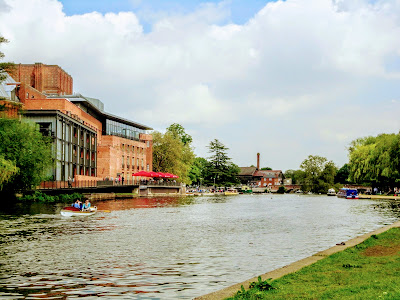 Taking a break already? I found a perfect patch on the riverside, yes I had made it to the River Avon. You guessed that's where the town gets its name. I'm not one for water-sports of any kind so I thought it would be wise to watch the people row their hired boats rather than trying it for myself, believe me that would have been a catastrophe if I did such a thing! The riverside was packed to the brim with lots of other tourists, most of these people sounded American! I lived in America, so pipe down! Technically speaking the whole world has a things for the work of Britain's most famous playwright! There was just something about this part of Stratford, a small town feeling with a large tourist following. There aren't many other towns that have the past that Stratford has been blessed with. Taking the stresses away from my schedule I know Stratford-upon-Avon chose me! Did I see a theatre? Yes, Shakespeare's!

There seemed to be a slight chance during my Stratford day as I originally wanted to see Anne Hathaway's Cottage before the river. I found out the hard way that Stratford-upon-Avon has a strange layout, something that cannot be helped due to the age of the town, so my usually good sense of direction did get compromised a few times. Sold as the Heart of England I know that this region holds the key to success for tourism, its a no-brainer! I suppose William Shakespeare's legacy lives on in more ways than one? Of course it does! Who wants to see a show? Shakespeare didn't make is pennies doing anything else? The Royal Shakespeare Theatre stared me right in the eye, sat practically upon the Avon River it blended in quite well within its historical backdrop. No, I didn't see a show because I wasn't on that hype! In a strange way all this Shakespeare talk took me back to my English lessons at secondary school! Deep down I really enjoyed learning about the different plays he wrote. Sure! 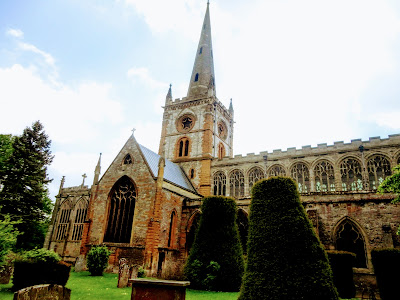 Holy Trinity Church showed me the grave of the great William Shakespeare, taking my day down a spiritual path. The Church itself looked lovely, lots of historical features were on display. Upon entering the church both of us adopted a whispered demeanour, being respectful I lit a candle for a dearly departed loved one. Paying our donation I made my way to the foot of Shakespeare's grave, for what I saw was inspiring. I hadn't been to a church for a very long time upon visiting Holy Trinity Church, I appreciated what I saw there. The Church of the Holy Trinity stands close to the River Avon, close enough it can be viewed from the opposite side of the river. This church holds a lot history for William Shakespeare because on the 26th April 1564 the playwright was baptised at this church. I make an allowance for places of worship when I visit a new place. Holy Trinity Church gave me calm! So much to see in one day!

The famous poet began his life at Holy Trinity Church and was put to rest there on the 25 April 1616. Visiting this church in essence brought me closer to the life and times of William Shakespeare. From rivers, to birthplaces and then onto reflecting in church our day in Stratford-upon-Avon had been extremely productive and cultured. Who knew that Stratford-upon-Avon would show me so much history and personality?! Holy Trinity Church were on to a winner, I gave my required donation of two pounds to enter the back of the church where William Shakespeare's remains lay beneath the stonework. With the popularity of Shakespeare's resting place such a hit with the visiting public I surmised that the church could be benefiting form the playwrights resting place? Even though that Shakespeare passed away in 1616, he's making a contribution to the town of Stratford-upon-Avon! Any place of worship deserves the respects its entitled to, I gave respect! Stratford, trust and believe! 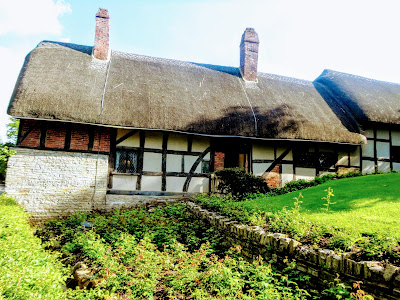 As my day in Stratford-upon-Avon entered its final stage I still had one more place to visit. Walking around one mile away from William Shakespeare's Birthplace took me to Anne Hathaway's Cottage. Anne Hathaway was William Shakespeare's wife, making her cottage home since her early childhood. During Shakespeare's time Anne Hathaway's Cottage was known as Newlands Farm. I loved the beautifully thatched roof, something that I don't see everyday in the metropolis that is Birmingham. Out of all the Shakespeare Trust properties I would say that Anne Hathaway's Cottage was located quite far from Stratford's town centre. Opting to not entertain the idea of paying to see inside the cottage I marvelled at this property from the outside. I peered over the picket fence to see the manicured gardens that looked lovely, I shouldn't be a miser with my money but that's a story for next time! OK? Never, no!

I went off on a tangent back there by the church, call it a moment of madness if you may? Introducing Stratford-upon-Avon fared to be a really good thing, it got me away from the city for one day and I learnt something about the town of Britain's most famous playwright, William Shakespeare. That master of words and the arts still makes a round coin for his town even thought I keep going on about that, I don't think many other people could be capable of doing that beyond the grave? Anyway, his birthplace happened to be on a pretty ordinary looking street and the frenzy that's created around the town certainly makes it a busy place to discover! Like many things on my doorstep I'm too quick to judge or I make too many excuses not to visit but the town of the River Avon was good to me! I even paid my respected to good old Will and walked one mile to see where his wife once lived! There's one thing that's for sure, Warwickshire hasn't seen the last of me! Play on! Thanks, William!