Krakow, Poland: Rollin' On The River!

Witamy! That's 'Welcome' in Polish. I'm a sucker for a short break, so back in February of 2010 it was time to fly east to Krakow, Poland. I would like to say that Poland has a family connection so I wanted to get closer to this notion. I loved Krakow because this city served realness, no false pretences about this Polish hot-spot! Nalej mi kieliszek Wiśniówka teraz! I'd go back to Poland! 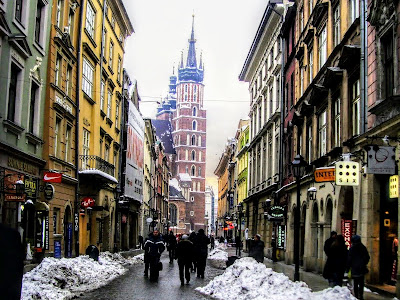 I was ready for Poland! The weather in February was bone-chillingly cold, that added to the overall experience. Captured to the right is Grodzka, a beautiful and historical area of Krakow's city centre. I stayed in Grodzka Apartments for three three days and two nights, check this accommodation out! Anyway, if you look closely at the photo to the left you can see 'St.Mary's Basilica'. I was blown away by the stillness of the cathedral, it was sobering! Now if you would like a brief history lesson the basilica was used in movie epic 'Schindler's List'. Krakow's Grodzka quarter didn't serve 21st century Realness, I appreciated the rich architecture that spoke louder than words! Mixed with the historical buildings, it was fascinating to see the soviet style concrete vibe, I was getting all up into that Polish city experience! As the E.U has widened the Polish contingent in the UK, we had to see what the fuss was about!

Krakow's main square stood triumphant before us, exuding a bold statement with its grand buildings and vast array of outdoor restaurants and bars. Tell me Krakow, what else can I do and see? Mixing things up we thought it would be good idea to walk into a part of the city that we didn't know to find the factory of Oscar Schindler. It was great to do some exploring away from Grodzka. We were on the lookout for Oscar Schindler's former factory, my mum had read that the former factory had been transformed into a museum. Oscar Schindler saved many Jews with his subtle yet cunning skills during the Nazi German occupation. Unfortunately, the museum hadn't been completed but it was interesting to see it from the outside nonetheless. We were able to walk back through some parts of the city that we hadn't planned to. We had accomplished something worthwhile since our Ryanair flight touched down from East Midlands Airport. Auschwitz was the reason for our visit! Yes, PL! 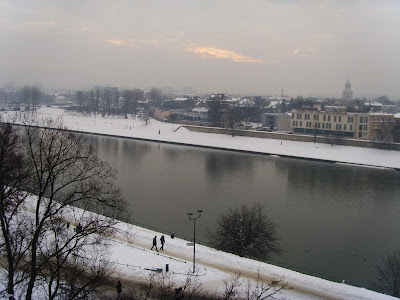 London has the River Thames and Paris has the Seine, but Krakow has the Vistula River! This river is lined with countless monuments, for me I have to say that 'Wawel Royal Castle' was a sight that stood out for me! Walking around the castle walls to reach the vista of all vistas, where the Vistula River will capture your soul. Built on a giant limestone rock the 'Wawel Royal Castle' dates back to the 7th century. The river looked very still, teamed with the freezing weather I would have loved to see this sight during warmer climbs, but who knows? I didn't get the chance to walk along the riverside but we cannot have everything. I wonder how 'Buckingham Palace' compared to Krakow's 'Wawel Royal Castle?' Krakow's historical flex knows how to work and serve, do they build castles like that today? Polska, mi powinna odwiedziłem szybciej?! We didn't have a plan, it was some years ago and for that I'm chilled about that. It's OK P!

From the 'Wawel Royal Castle' and 'St.Mary's Basilica' this Polish powerhouse has the future covered! Poland is no longer a communist country, throughout my short time spent in Krakow, Poland I saw a lot of new developments that sat alongside a barrage of concrete avenues. The weather made everything look much more wintry, the snow tucked Krakow in each night with its white blanket but it looked so good! Casting my mind back to our arrival into Krakow's John Paul II International Airport it would have been a near impossibility for any UK airport to handle the adverse weather conditions that faced our approaching Ryanair flight. Krakow was cool in many respects but I was all about the Wiśniówka! I loved that Cherry Vodka, taking a few shots was just enough for me because that sauce was lethal! Polish lager is so much stronger than the stuff I can buy in the United Kingdom, was I complaining? No! Daj mi więcej Wiśniówka i Piwo! Sorry Goulash, I really wanted some KFC! 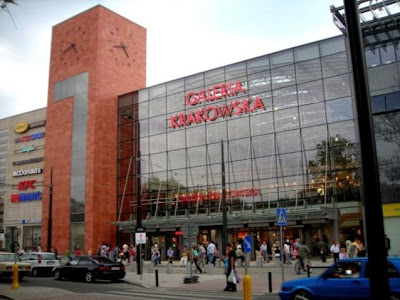 Shopping isn't my thing but they city's 'Galeria Krakowska' offered us the best department stores and restaurants that suited us where our tastes lay. I didn't try any Polish cuisine because the 'Galeria Krakowska' had the best food court. So, I'm afraid it was KFC for the two nights I was there! Forgive me because I am usually quite adventurous when it comes to trying new foods. Even though I could find the same shops in Birmingham as I saw at the 'Galeria Krakowska'. The ice cream served from one parlour that caught my eye was one for the books, my brother will agree with me there! Getting to the 'Galeria' should have been easy but I somehow found myself travelling on a short train journey, probably only taking five minutes the experience was something else! An experience for sure! But for what stood before I was taken aback, Krakow impressed me! If this is Poland's future for shopping then I'm all up for that! I love KFC!

The 'Galeria Krakowska' is located a few steps from Krakow railway station, so I know for next time I could take the train to somewhere else in Poland. But my weekend in Krakow wasn't all department stores and castles because this trip took a thought-provoking avenue. We traded the historic and charming streets of Krakow's showcase city centre for a more sobering outing to the nearby town of Oświęcim so we could visit the former Auschwitz Concentration Camp that was used to exterminate the Jewish population under Adolf Hitlers Nazi rule. After speaking to family members I'm sure that my distant paternal relatives suffered at the hand of the Death Camps. I tell you from my heart that returning to Krakow was a relief because when you visit such a place like Auschwitz, it touches you in the most raw way. Poland is a country that's rising, I'm looking to revisit this city and I definitely want to see more of this post-communist county! Polska jest głównym! Chodźmy!