I've been extremely cultured recently, going to see a musical and the ballet. On the 4th of June 2013 I attended a performance of Birmingham Royal Ballet's Coppelia. I previously attended a ballet some years ago but didn't understand why the dancers were silent, so this time around things were a lot clearer. Let's turn the television off for once? I loved the ballet, not the snobs! 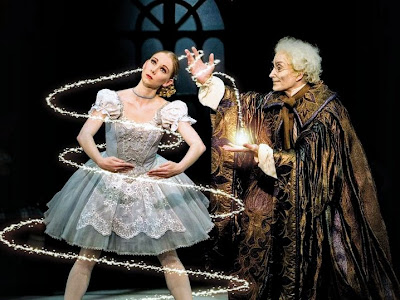 Taking my seat, ready for Coppelia the first ballet I have seen in a long time, I must admit I was very excited! My seats were perfect, located on the left side of the front circle I was more than happy with my purchase. Things were very punctual as the curtain rose at just the right moment all in perfect time. From the very beginning I was mesmerised by the floating ballerina's and ballet dancers, they were simply beautiful. How would this performance compare to the vibrancy of Hairspray: The Musical? It had only been five days since I had last been to the Hippodrome, now that's what I call dedication! Why had I not booked a ticket to the ballet sooner than this? It might seem like I'm droning on but this scene from act I was simply charming! I'm going to keep this straight, the vibe before the show was quite stuck up, people needed to pay more mind on the arts not their entitlement. Money too much for some? Yes B!

Act I - Swanilda; a beautiful young woman danced onto the stage wearing an elegant gold ballet dress, followed by a very good looking man who was named Franz. This gentleman must have been Swanhila's companion or friend? Regardless of that fact, my eyes were straight up bamboozled, those male ballet dancers tights showcased everything! I'm going to the ballet more often! Swanilda stayed to one side as Franz had discovered something sitting upon the balcony of Dr. Coppelius's workshop, the young man was captivated by the doll like figure who was frozen but looking as if she was reading a book. Franz started to cheekily blow several kisses up to the doll named Coppelia. Swanilda had caught Franz in the act of his deceit, she threw a book from her balcony onto the stage, which almost hit Franz's head but it missed. The first act was complemented by the open orchestra that was being conducted below the stalls. So, I loved it BHM! No mistakes made, what took me so long? 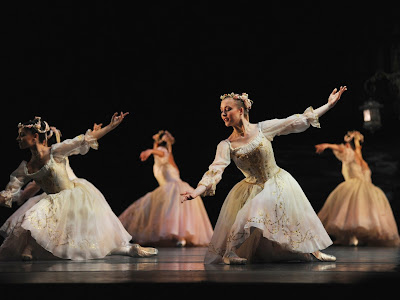 Act II - With the first interval done with I was ready for the second act of Coppelia to begin. Dr. Coppelius went across the way for a drink in his local tavern but a group of men gave him some trouble, thankfully the landlord of the tavern came to his rescue! Did Dr.Coppelius forget something? Swanilda and her friends tip toed with the key to the workshop in-search of Coppelia. Franz made his way closer to the workshop with a ladder to get to Coppelia. Like sparkling fairies in the night Swanilda and her friends made it to the workshop where Coppelia sat. Franz pushed the boundaries by breaking his way into the workshop in-search of Coppelia. Dr. Coppelius didn't take kindly to Franz's audacity, greeting him slyly with a glass of wine to make Franz welcome. To the Dr's delight Franz fell asleep instantly, leading to another revelation that didn't concern Franz's slumber. Did she appear? Of course Coppelia did!

Seeing is believing because I was taken aback at what was going on in the workshop. Swanilda appeared, but she looked every so slightly like Coppelia. Dr.Coppelius couldn't believe his luck because he thought that Coppelia was coming to life! Swanilda played along with the Dr's frantic behaviour, taking life from Franz to give to the convincingly looking Coppelia. Nobody knew anything different! But Swanilda became tired of the Dr's tedious commands, she revealed a flattened doll to the Dr which had previously been Coppelia. Not content with causing enough carnage Swanilda woke the frozen dolls from their sleep and she also roused Franz from his slumber, taking him away into the night. I don't ever want this ballet to finish! Who knows if I'll go back to the ballet? I'm more of a jazz hands kind of guy! The demographic within the theatre wasn't the usually crowd when I see a musical, I guess variety helps sometimes? Don't quote me about ballet any further! Prance I say! Brum Royal Ballet, go!

Act III - Coppelia's true form had been revealed, leading the speculation that Coppelia was simply a motionless doll. Franz had been drugged and Swanilda had been the heroine by saving him, whilst still pretending to be the doll. The bells of matrimony were chiming, leading a series of solo dances by the female ballet dancers. Wearing baby blue costumes the male ballet dancers graced the stage with their talent and moves, celebrating the upcoming wedding of Franz and Swanilda. Yes, those male ballet dancers were beautiful! I could tell that the ballet was drawing to a close as the shows concluding routines were executed. OK, I'll get back to the ballet! Where's Coppelia got to?! Oh, I lied about ballet I loved Billy Elliott! Copp was next level! Yes!

Seamlessly dancing into the final minutes of the show, the whole cast transitioned into a beautiful finale dance, revealing the exchanging of gold between Swanhila and Dr. Coppelius. I have no trouble in saying that Coppelia was a beautiful show by all accounts, from the simple set to the precision of the ballet dancers who danced effortlessly throughout the whole performance! Now that's what I call perfection! My evening at the ballet was simply breathtaking, now that would be a talent you have to be born with! Get your tickets for an evening at the ballet, its definitely one way to experience a civilised night out! Until next time Birmingham Royal Ballet, I would like to thank you for such an amazing show and opening my eyes to the beauty that is ballet! Coppelia showed me a thing! Slay B!