Birmingham's Eastside stands to be a catalyst for change. With the Eastside boasting the former Bird's Custard Factory and the origins of Birmingham's Irish Quarter which, today stands to flourish because of the St.Patrick's Day Parade. Will Curzon Street Station be brought back from its demise to become the possible terminus of HS2. Sure, Digbeth has got a brand new groove! 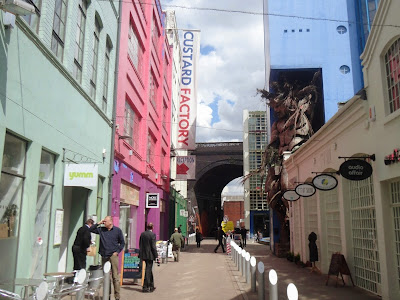 Did any mention Bird's Custard? Yes, I did! Has a new legacy has been created from the demise of the original Custard Factory? Today, the Custard Factory stands as a vintage clothing hot-spot, which attracts Birmingham's hip and young residents looking for a groovy outfit to rock. Fair does but it's not my scene. There are some former buildings standing of the existing factory that stands today, pleasing the lively scene of ravers ins the main warehouse. I enjoyed an immense night at the custard Factory in September 2010 at the end of my first year's freshers event. I've got love for the Custard Factory! I've not been back to the Custard Factory for a night out since I saw Alex Zane and Jaguar Skills tearing up their sounds but I never know what the future holds, well sometimes I can see it! 2010? Yes, that much time has really past since that Fresher night-out! Keep it going strong, Eastside needs this new life!

Seeing the Custard Factory from a whole new perspective the other day when I visited was refreshing. The eateries were busy with lunchtime business people getting a bite to eat and residents from the neighbouring apartments all going about their business. I would say that Digbeth has a very retro feel with its cool art galleries and vintage kitsch fashion shops, I admired the products on offer but with my student budget I didn't look all that close. Birmingham has impressed me since I moved back from the United States of America! It's all about taking pride in the place that we live in for what else do we have? Yes! Will Digbeth become the new post-industrial hipster centre of Birmingham? Maybe, just maybe. Anyway, looking to the future of the Custard Factory I can see that the legacy of Bird's Custard will live on through the cutting edge facility that has revolutionised Digbeth. Like I mentioned before, Eastside has kick started a new old new groove! Now I want to eat custard! 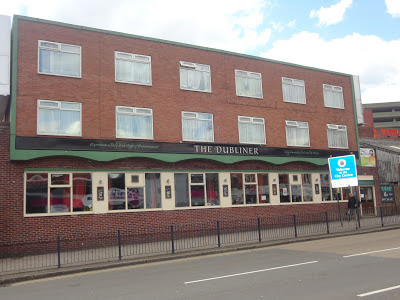 Birmingham's Irish Quarter is centred around Eastside. Pictured to the left is The Dubliner pub, this public house stands on Digbeth High Street. This pub has bounced back against all odds after it was subjected to a terrible fire, destroying this Irish focal point in Birmingham's Eastside. The Dubliner reopened its doors to the public in a very short space of time after the fire. On the last St.Patrick's Day I saw the revellers enjoying themselves and I heard the chimes of The Irish Rover song by The Pogues being played. I missed the parade but got to grips with the post-parade shenanigans alright! Let's just say that some rather shady things happened to Digbeth's Irish establishments in the 1980's but the future remains to the bright, leave the shade for another day! I don't usually drink in Digbeth, its never been my scene but I could be persuaded to change that! Keep it lucky in the Irish Quarter I said Brum!

Digbeth is home to various other Irish pubs within the quarter which are The Kerryman and The Irish Centre. The Irish Quarter brings a certain flare to Eastside because each of Birmingham's inner city regions has its own persona. The Irish community have been part of Birmingham's rich blend of cultures and communities from as far back as the 1820's leaving a legacy and building a strong link with Digbeth and the wider region of Birmingham's Eastside I hope that next year's St.Patrick's Day goes as smoothly this years festivities did! I have every confidence that Digbeth holds its Irish Quarter close and keeps its customs and festivities alive for future generations to love. No matter what happens it clear to see that Birmingham as a city has an ethnically and culturally diverse make-up, instilling a colourful existence in Digbeth. I went to Dublin and Belfast in March 2013, seeing another side of Irish culture! I know that Brum will carry on celebrating St. Patrick! Watch this Emerald space! 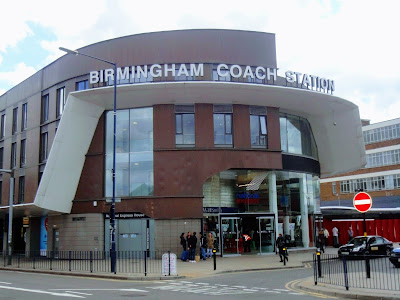 Eastside has gained better transport facilities as the years have past me during my University College Birmingham. Birmingham has gained a new coach station. This new amenity is home to National Express coaches from the all new Birmingham Coach Station. The new facility has been praised because of its efficiency and proximity to Birmingham city centre. I have used this transport hub on two select occasions to Huddersfield and Northampton. I was once sceptical about taking the coach in general as I always favoured the train, but my experience from Birmingham Coach Station has been positive. I will look forward to my next National Express coach journey in the future as I was very impressed considering I haven't yet taken a Megabus from Hill Street! I will inevitably take a Megabus but hands down its much better to wait inside  the station. National Express, keep Eastside moving forwards! Go, go NX!

I would say that Birmingham is ready for another reliable transport gateway, Digbeth happened to be the chosen quarter to benefit from this development as I believe the original Coach Station had seen its day! Whilst New Street Station is being redeveloped we do need a gateway that brings tourism and business to the UK's second city. Digbeth is close to Birmingham Airport, another major gateway for the city which benefits from regular coach-loads of passengers alike. I have every confidence that I shall continue to utilise Birmingham's Coach Station as Eastside deserves everyone's support, Digbeth brings people to Birmingham without knowing it because of its the retro capital of the city. I want to see the Midland Metro in Eastside next, go ahead West Midlands Transport Authority get that extension built because London and Manchester can't win all the time! Keeping my day trips going I know that I'll be using the coach station for a National Express journey in the future. 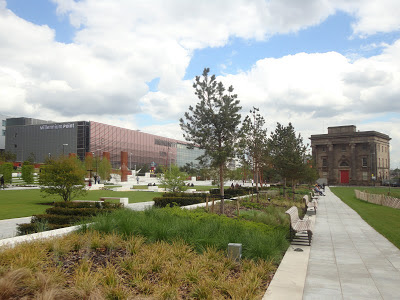 Eastside has been transformed by the Millennium Point, bringing a futuristic day out for all of the family. Captured to the left is Eastside City Park which has been only been visible to me since I have returned to Birmingham after my placement in America. This is a testament that Digbeth has been progressing and moving forward compared to the other parts of the city of Birmingham. The first time I came into contact with Eastside's City Park it was quite cold, dismal and empty but just the other day the weather was very nice so the activity I saw was quite positive. I love a good cup of tea so I'm hoping the rumours about a possible redevelopment of the once Typhoo Tea factory is considered to make way for the Typhoo Wharf complex that shall affirm that Digbeth is rising from the shadows to be better than that Bullring! Can't let that Bull have all the phrase! I look further than the predictable attraction! Go!

High Speed Two is poised to be steaming its way to Birmingham's historic railway station, Birmingham Curzon Street Station. Reports have been rife whether the milestone project will take place, transforming the way high speed rail will be making its way to the West Midlands from London. It's been a rocky road and there's no sign of any final drawings but Curzon Street Station will most likely be the Midlands terminus of the slated High Speed 2 project. I see a decision being made about the high speed train line, but it's a big step for Birmingham and Eastside's future. Only time will tell whether Curzon Street Station will welcome the High Speed Two train in the near future. Eastside could be expanding before everyone's eyes to reinvigorate that standing station that could return to greatness?! New Street Station is getting a rebuild so what's the problem with making High Speed 2 a reality? Anyway, let's get on with it Birmingham because Eastside is the future! Make it happen, Birmz!