With a day spare in Dublin I decided to jump on the cross-border train to Belfast, I wanted to investigate this city to see if the tensions had subsided and to see what British influence Belfast carries forth to this day. Religion is religion and that shouldn't make a difference but this publication does follow a certain theme, I won't lie about that! UK phone signal was everything! 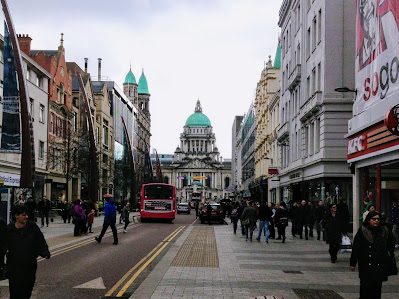 Stepping off the Enterprise Inter-city train at Belfast Central, I had left the Republic of Ireland behind me. I checked my phone and to my delight my signal and internet had returned. The Euros that I possessed were worthless for British Pound Sterling is the currency of Belfast, Northern Ireland. Technically, I was standing in the United Kingdom a step closer to home, England! I only booked my train to Belfast a few days before I boarded my Dublin bound flight, I wanted to experience a different Ireland. My first port of call was Belfast City Hall, finding this point of interest was really easy as the streets from the train station were signposted well. I knew that Belfast City Hall looked like a smaller version of London's St. Paul's Cathedral! Yes, I think so BFS!

The British influence could be seen all around the main city centre area of Belfast, a stark contrast from the architecture that I had found in Dublin the previous day. From my first moments of being in Belfast I sensed a really positive aura of the area around me. I will be honest the weather in Belfast wasn't that cold compared to the likes of Dublin, the snow had hit Belfast quite considerably cancelling flights and causing general chaos to the whole of Northern Ireland. The air was cool but not that cold. Enough about the weather I had so much to see, so much to do all in one day! Belfast honestly didn't how ready I was to explore and uncover some of the events that have shaped this city and this part of the United Kingdom on a wider basis, I had no idea! Oh, I was thankful for the United K'dom! 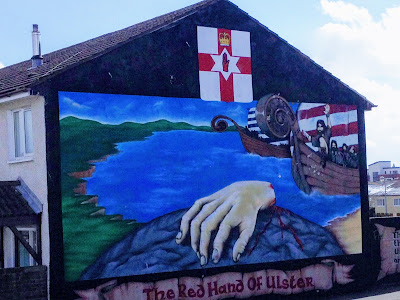 Becoming a political tourist was entirely my plan, I wanted to see things that represented the troubles. Taxi Trax Tours enabled me to see how the two communities live in Belfast. My first stop was in the Shankill Road area, a Protestant strong-hold which was quite remarkable! Captured to the right is a mural depicting Oliver Cromwell's 'Hand of Ulster' I was shocked by what I saw and the meaning behind the flag and the 'Ulster Hand' because it didn't seem to represent a welcoming feature. My taxi driver/tour guide informed about the area that we were in, I have been to some eerie places but this side of Belfast was a very bitter pill to swallow. One mural featured a masked 'UVF' fighter, which turned my stomach the wrong way. This said mural had this 'UVF' fighter pointing a rifle at whoever was looking, how I felt it all. Shankill showed me a contrast of feeling and emotion that spoke of anger and stillness.

Something about this area didn't sit right with me, you don't have to show your loyalty to Britain by flying the 'Union Jack' flag high on every corner. I believe the Protestant people only do this to antagonise the Irish Catholics. Religion is religion but why should that get in the way of normal life? Tourism presents itself in many different ways, I took my Taxi Trax experience very seriously and with many thoughts crossing my mind about the question mark that is the United Kingdom. Are we really that United? Probably not so! Aside from the religious statements presented, the Shankill Road area exuded a frozen personality that stood cold in time, mixed with the cool weather and left-over snow the whole atmosphere of the place I didn't know what to think! Along with the unsightly murals this area was nothing more than a seriously bleak council estate. I would have loved to of heard what the Protestant's thought of the Catholics even after the troubles. B, has the situation really changed? 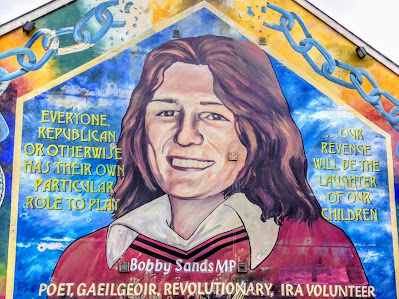 We drove across the Peace Line into the Falls Road area that interlinks with 'West Belfast'. Being on the Catholic side of the city I felt certain kind of safety. We passed through a twenty foot cast iron gate that separates the two communities this gate was once closed for thirty-seven years. Now it only closes from Friday to Monday morning. Taking sometime out to see the Clonard Martyns Memorial Garden, the gated area remembers the lives lost from the fires of Bombay Street. The people of the Catholic community raised the money to rebuild the houses of 'Bombay Street' because the Protestant council refused to help the Catholic residents affected. Belfast doesn't hold anything back, for these certain reasons I don't want to either!

Overall I did feel a lot safer on the Catholic streets of Belfast, moving through to the Gaeltacht Quarter another Catholic community in West Belfast which embraces their Irish Gaelic heritage. I was shown a mural of Bobby Sands MP, an inspirational man from the Catholic front in Belfast. Bobby Sands was a Catholic Member of Parliament and also a freedom fighter. He is the hero within all of this heartache and struggle but for the humanity of Northern Ireland and Belfast as a city the future should be here and the past should be behind us. In theory Belfast is a city with two hearts that believe in two different ideals that clash on a scale that hasn't ever been equal, believing in one god works for some but why can't there be unity instead of hostility? Check out www.taxitrax.com today B! 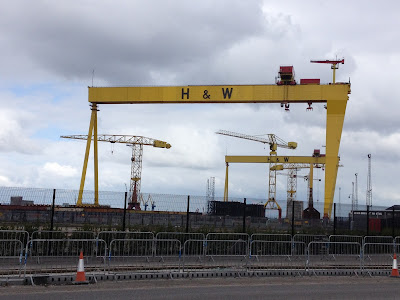 To end my day in Belfast I ventured over to the Titanic Quarter to investigate the Titanic Belfast Experience. I had seen quite a lot in one day so this final part was the light addition that finished my day off perfectly. The docklands in Belfast City seemed to be going through a serious development project. The Titanic Belfast Experience showed me so much more than the movie could ever begin to. From the futuristic landmark building to the detailed exhibits that showed the ins and outs of the Titanic Liner, I was really impressed. I actually never knew that the Titanic was built in Belfast until that day! I would have to say that this experience taught me so much more compared to the glamourised scenes from the movie starring Kate Winslet and Leonardo DiCaprio. I'm not one for cruises but if I was on a passenger on the New York City bound Titantic, it would have been Third Class for me! I'll fly to NYC! OK!

Through my day in Belfast, Northern Ireland I experienced a moving and exciting juxtapose of emotions. Visiting this UK city made a lot of sense because one way or another we all struggle and hope for a day when all of us can sing from the same hymn sheet. Is religion the cause of all the trouble or is it history and a warped sense of tradition that's fuel for the passion. I went to a Catholic school for both Primary and Secondary but believe that religion should not separate us or cause conflict because we are one world with the same fight for life. Belfast I wish to see you again in the future but girl you've got some work to do! Let's just say I had one heck of a trip in Ireland both Republic and Northern but I'll say for sure it was great having a proper phone reception in Belfast! I'm a superficial soul! Belfast, I thank you for a thought provoking and enriching day because we've all got a bit of struggle in our lives but shining bright is what we do best! Belfast is a city with a golden heart!