National Express: Empress Of The Motorway?

What's your favourite mode of transport for a long trip? My personal favourite has to be flying and then second the train, but I broke that vow recently. Will I ever be forgiven? I decided to take the National Express coach from Birmingham to Huddersfield but the trains via Manchester Piccadilly were scandalously expensive for my slimline student budget. I'm ready! 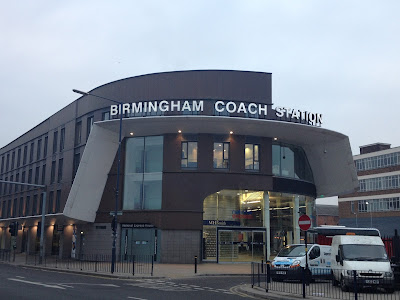 So, I found and booked my super cheap round-trip coach journey with National Express. Why do train tickets have to be so damn expensive?! Maybe I might get to see more of the country en-route to my destination? Variety is the spice of life! The phrase 'beggars cannot be choosers' springs to mind, but my trip to Huddersfield was well worth the coach fare. BB was forced to be trapped with the common people, I was but it wasn't that bad! Reporting bright and early to Birmingham's Coach Station for my epic journey to Huddersfield via Sheffield Interchange was naturally the first phase of my mammoth journey. NX320 was scheduled to depart for its second leg from Cardiff to Bradford, it was stopping in Birmingham first. 08:40 am brought the on-time departure of my coach, which I would be leaving at Sheffield Interchange. Would my National Express trip be smooth? Thankfully, they both arrived on-time. Thanks!

Speeding cross-country my first coach service passed through Lichfield, Derby, Chesterfield then arriving into Sheffield Interchange within the scheduled time. Pulling in and out of the various coach bays made the first part of the outbound journey went by quickly if I'm honest. I chose to travel on a Sunday morning and found that the traffic was non-existent, a benefit all round because I had a lengthy journey ahead of me. I would have preferred to have took the train because I personally feel that taking this mode of transport makes the journey seem faster, I personally think its the illusion of places flashing past in a super speed motion but I'll let you be the judge of that!? Huddersfield was getting ever closer but as I looked on my iPhone to see where on the map my coach was driving around the Peak District, I wanted that National Park to disappear for a little minute so the journey didn't contain so much countryside, it's not good for the mobile internet signal! 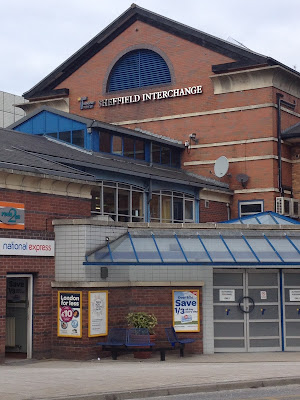 Taking a break from sitting on a coach, Sheffield Interchange was my place of transit for two hours. Driving into Sheffield's city centre was an interesting experience, if truth be told I could have done with another hour to have a look around the area further than the bus station. As the time pushed forwards I saw a coach that shared the same number as my next coach to Huddersfield. Being curious I asked the representative where the said coach was departing on-wards to, I shouldn't have bothered because the tone of the answer was blunt and rude. I only asked you a question! That NX564 was bound for London, I would have been going the wrong way! I would have had a look at Sheffield's city centre but I didn't want to miss my coach. Why had I not thought before about travelling from Birmingham for a little weekend away? After my placement I definitely feel that I have more confidence to pack a bag, book a ticket and just get the heck out of Birmingham for a day or two! Newark had me running from place to place, I don't want to change that now I'm back in Birmingham! Bitch, no!

Onwards to Huddersfield the motorways disappeared into winding country lanes for the best part of the second leg of my outbound journey, Huddersfield was calling! I had arrived in Yorkshire as my National Express coach passed through the small towns of Wakefield and Barnsley, well I literally saw the coach stations and they didn't look to shabby! Overall, the first two sectors of my outbound journey had passed without any hitches. Maybe if the train fares are still high when I'm next looking to take a trip, could the coach be a serious choice? National Express, I could actually be persuaded to take another trip on your coaches! Apart from that certain person I was sort of enjoying my coach experience, I'll be brutally honest, it felt much longer than a train would! Yes, express coaches within England didn't have the same customer service that Bolt Bus and Coach Canada had during my 2012 trips but it was something different! 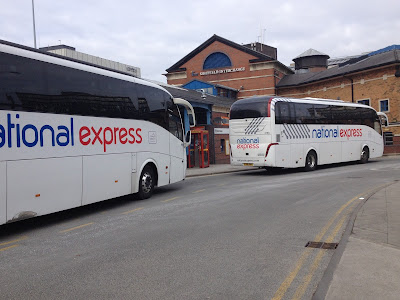 Forgive me for my sins, whilst I was travelling in America and Canada I did choose to take the coach a few times. Trains are fiercely priced in America and almost non-existent in Canada, it must have something to do with the shear enormity of these two countries. I choose the Bolt Bus from Newark to Washington, D.C. The fare was very reasonably priced and amazingly got me to my destinations on-time! Coach Canada transported me from Toronto to the Niagara Falls area during my trip to Toronto last October. I completely missed the coach station so I did not make my coach at all, thankfully my ticket was changed so I caught the next coach! Moving back to the U.S I took the Amtrak up to Boston and chose to take the Megabus back to New York. My return trip on the Megabus back to New York was swift but due to traffic around the Connecticut area my arrival time was later than expected. I'm sorry NX!

Moving back to my current National Express experience I did encounter a slight delay on the inbound leg of my journey back to Birmingham. I suppose arriving twenty minutes late back into Birmingham Coach Station wasn't too bad? When all said and done I encountered a relatively good journey for a fantastically low price compared to what the trains were charging, the coach might well be my next mode of transport for a long distance trip? My time in Huddersfield was short but great still and didn't cost me the earth because the coach fare was under £20.00 return so I had enough money left over to enjoy myself. I unintentionally saw a new place if it was for only three hours spent at Sheffield Interchange. I can sort of put Sheffield on my tick-list of places that I have been to but I'd like a weekend out there. As for the bus station in Huddersfield well that's an experience all by itself I tell you! Now, could I call the National Express the empress of the motorways? Honey, I did just that!