The Republic of Ireland was calling me! Booking my Ryanair flight within weeks after I got back from America, I needed to see the Emerald Isle and drink a pint of Guinness stout! It's a destination, a city that's not to faraway from home so I needed to see this place for myself. I don't need anyone when I travel so I packed my carry-on bag and set of for the city of Dublin! 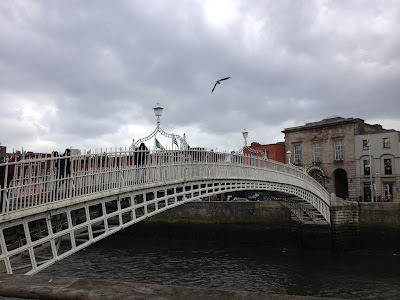 Dublin welcomed me with rain! I literally hit the ground running without a minute to lose. My parents had been to Ireland countless times during my childhood so I wanted to see what all the fuss was about! The Republic of Ireland stood before me, well the city of Dublin. I wanted to know what 'Dublin' looked like in the Irish language! It's Captured to the right was the 'Ha'penny Bridge', it was a sight that I had seen most times when Dublin would be portrayed in the wider media. From the second I landed in Dublin, Ireland I threw caution to the wind by following the outline of the 'River Liffey', that Irish river put things into perspective I was finally in the Republic of Ireland! I didn't have a lot of time, I was on the pulse from those first key moments as my airport bus stopped in the city centre. On a students budget, I was watching my Euros! Where was that pot of gold? Regardless, I intended to enjoy my short stay in Ireland on my shoestring student loan! I was curious, I wanted to see both Irish capitals! Dublin was first!

Would I be greeted by a little green Leprechaun? I made my best attempts to discover the Irish charms of Dublin right from the second I checked-in to my hostel. Rewinding back to my first moments in Dublin, back at the airport I encountered a family that sounded every inch the modern Irish Gypsy Traveler. I speak of them in the most endearing light because they meant no harm but certainly made me laugh to myself with their conversation sounded so Irish! I had just landed in Ireland, a stereotype maybe? Flying from Birmingham Airport with Ryanair my early morning flight only took fifty minutes to reach Dublin Airport, I was right on time because my short time frame didn't leave much space for delays! I had a few places in for my day in Dublin but I wasn't going to go crazy, I wanted to enjoy the time I had there. One thing that I noticed quite soon was the strong Dublin accent that sounded rather nice, well that's for the gentlemen, ladies I'm not sorry! The hostel was questionable but I was fine. Dublin, we ready! 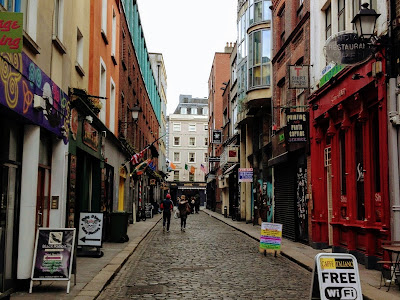 Setting up camp whilst in Dublin was a very easy task, my residence for the two nights that I would spend in Dublin was at the 'Oliver St. John Gogarty's Hostel'. I literally slept in my dorm, benefiting from a shared bathroom connecting to the room it was a winner! I just needed my own key! The less said the better! Being an independent traveller I don't need luxuries I just need a place to sleep, I would say that finding somewhere to stay in Dublin for a low price can be a task but its all about persevering. It was just a bed, so who could complain? My hostel was in the 'Temple Bar' area of town, situated on the south of the 'River Liffey' this property was located in a prime location, close to the local amenities. Yes, Temple Bar served tourist appropriate Dublin with all the pubs. I was glad to be right in the heart of tourist Dublin because my time was scarce! I had to keep moving, with so much to see I didn't know where to go next? I wasn't in the mood to get sloshed, the views over the 'River Liffey' were intoxicating enough to look at.

Dublin's Connolly Station was only a ten minute walk away so benefiting me for my onward trip to Belfast. This super cheap option only cost me €25.00 for the two nights that I spent in Dublin. Who needs the Ritz-Carlton? The 'Temple Bar' area was seconds away from the centre of the action, playing its part in giving foreign tourists what they want when it comes to traditional Irish culture. The pubs along 'Temple Bar' played a selection of folk classics that pulled in the punters to spend their Euros. For one day under my belt, Dublin allowed me to scratch the surface, I was more than OK with that! I spent my first night having a few early evening pints in my hostels own pub, it was a lovely night as I felt at ease and enjoyed some lovely pub food accompanied by the lively sounds of a Irish folk band which played many songs that took me back to the age of ten, I did have a flashback or two! Let the free birds fly! Yes, I remembered the words to those songs that reminded me of my childhood! Did they play the 'Irish Rover?' 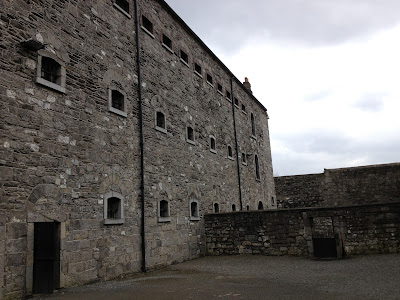 I had only been in Dublin a few hours, I had to keep going otherwise I would fall asleep! I made my way over the 'River Liffey' to find the 'Kilmainham Gaol' the jail from yesteryear. I took the Luas to St. James Hospital stop to make my way to the prison that once killed prisoners straight threw the heart. Walking down the 'Old Kilmainham Road' I could not get over the cutesy mining houses that sat on the side of the road. After getting a tad lost I asked a local Irish girl where to go, her accent almost mesmerised me. Finding the jail was an immense feeling as I tried to use the tourist map as little as possible. Booking my trip for 1:30pm I realised that I would be okay with seeing the sights for that day. The luck of the Irish would definitely be with be for that day, this Dublin prison sent chills down my spin it was that eerie! I didn't want to be predictable by going to the Guinness Storehouse, I made my own rules because I didn't warrant the money spent on admission. I still loved DUB but had my plan and that was fine for me!

My trip around the jail was extraordinary, something showed me that people truly suffered for the crimes that they had committed. The tour itself gave a lot of food for thought, something told me that I would not want to be in a prison like that. 'Kilmainham Gaol' has been the set of many films such as 'The Italian Job' and 'The Whistle Blower' something that could be shown as a positive thing to have been produced by this institution. Life's hard but I couldn't imagine how bad it would have been for the prisoners who served their sentence at 'Kilmainham Gaol'. I had to modify the way I conducted that Irish trip for I wasn't permitted to discover the prison by myself for it was too dangerous, not fair! But abiding by the rules has to be done. Sometimes we don't get what we want but adopting some patience I saw exactly what I wanted from my trip that strange Dublin prison! I'm a law abiding citizen so spending time in that slammer would never be an option! No prison time for me but the 'Kilmainham Gaol' opened my eyes for sure! 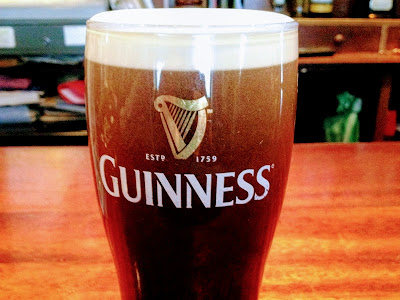 As mentioned before, I was in my feelings about the 'black stuff!' Ditching the Guinness Storehouse I found a quiet Irish pub called the 'Patriots Inn' that served me with my first pint of Guinness. I drank every drop of my pint, I took every aspect in about this experience. It wasn't just a pint, it was the accents and conversations that filled the small bar area, I could actually feel like I was in a true Southern Irish pub. I thanked the Luas for being so convenient as I was able to get from one point of Dublin to the other, all in good time if I don't say so myself. Great, the Luas got me where I needed to be but get it built from the airport, let's get that sorted? My pint of Guinness was quite overpowering but nonetheless I drank every drop. It was purely for the experience, I had that covered. Getting out of the city was ace, no tourists! Taking a road that allowed me to see a normal Dubliner street that was away from the noise paid off indeed. The friendliness of Dublin made me feel like I had made the right choice. Dublin? Definitely!

Ryanair got me to my Dublin location from Birmingham Airport that same morning, I was spent! The day was definitely a whirlwind, getting things done was what I did! From my visit to the prison to my views of the green fields of 'County Dublin' I knew that my time in Dublin was totally immense. Temple Bar had me in the right location, I was in the heart of the city and on the riverside, my wanderings were not for nothing because my hazy plan came to fruition. Getting away from the tourist trap for a brief second, the Euros looked after themselves when I got clever with my choices. The 'Kilmainham Gaol' had me in a prison for the very first time, no I was not the criminal doing time! Tired from the day, I had some pub food in the bar in the same building as my hostel. As mentioned before it was going to be an early night, I slept lightly because my Belfast train was early the next day. Dublin, a city that I would definitely return to one day, I still have much more to seek once I have more of a budget. See you soon?  Sure!
No More Guinness!