New Orleans, USA was the next stop on my United States travel crusade. Completing my Industrial Placement called for a weekend away in the Deep South, I usually travel independently but my former Virgin Atlantic Clubhouse sister Fiorella joined me this time. I wasn't prepared for the torrential downpours that NOLA threw at us but we loved 'The Big Easy!' 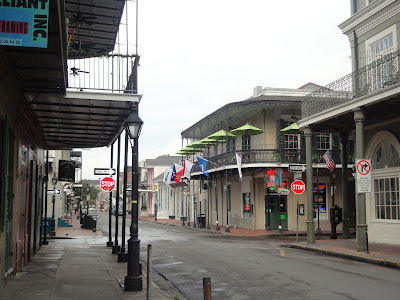 After working my final split shift at Newark Liberty International Airport for Virgin Atlantic as a Passenger Service Agent I had a 3am wake up call for my trip to New Orleans, USA! Travelling with my dear friend Fiorella, we took to the skies with Delta Air Lines from New York's LaGuardia Airport on the 8th of January 2013 with a whole lot of expectations for our Deep South trip! I'm always an independent traveller but I had finally found the perfect travel companion! Touching down into Louis Armstrong International Airport, New Orleans was at our feet ready for us to explore. As we made our way from the airport to the 'French Quarter' it was mad to pass through the city where the merciless 'Hurricane Katrina' tore her way through to cause an untold amount of destruction and turmoil. Fiorella had taken a nap on the flight but I was far too excited to sleep, I was in a state of delirium and it was still early! Get it, NOLA!

Arriving in the 'French Quarter' we did not lose any time exploring the charms of this French Creole/Spanish looking neighbourhood. The weather wasn't strictly on our side but we didn't pay that any mind! Our hotel was located on Toulouse Street, just around the corner from the famous Bourbon Street. Of course, Bourbon Street amazed me and my dear travel companion! It appeared to be quite distasteful, boasting establishments that would cater for bachelor and stag parties, we all need a bit of 'Bad Girl, Gone Good' in our lives! Being frank I was not unimpressed by the fashion of Bourbon Street, along with the neighbouring streets I was living a dream during those first moments and for the rest of the trip. We looked closer at the fabric of this 'historic' corner of NOLA, those quirky parts gave us life because we didn't want ordinary! Voodoo? I didn't want that Hoodoo but we had a look at the gift shops that had me wanting to buy a Voodoo doll, I bought a NOLA shot glass. Yes! 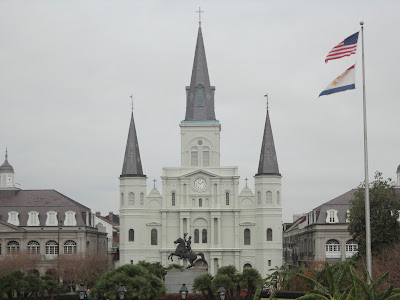 I lived for Disney's 'The Princess and The Frog' film, both myself and Fiorella shared our delirium for this trip. I was serving my best 'Princess Tiana' persona as we made it to Jackson Square. The atmosphere within Jackson Square was simply amazing considering the gloomy weather that was looming! There was jazz music in the air and the sun was even shining a little bit, unfortunately the cold shadowed the warmness of the sun. Rollin' on the river, those waters from the mighty Mississippi flowed past us as we made our way towards a beignet cafe. Enjoying two beignets each with a cup of coffee served us another 'Tiana' moment! Did we want our fortunes told? We passed on that offer, getting our lives once more it was time for a cocktail or three to toast our first day in New Orleans! Those washing machine ice mixed drinks were so very good! We enjoyed ourselves but knew our limits. Yes, we had more drinks later on!

We discovered an absolute gem of a restaurant, located on the corner of Jackson Square was 'Stanley's'. This simple and contemporary looking restaurant served a grand breakfast that fuelled our second half of our sightseeing. Myself and Fiorella absolutely loved 'Stanley's', we loved it that much we ate there twice on the first day. I chose the Gumbo Shrimp Soup and Fiorella enjoyed another Po'Boy Sandwich, I had lost a lot of weight during my Industrial Placement year, getting some wholesome food in my life was much needed! Jackson Square gave us some beautiful views of the Mississippi River, due to the weather and our early arrival we didn't take a river cruise. Appreciating the views took us some going because the rain kept on pouring down! To be spending such a special weekend with my friend from work was great, exploring the city of New Orleans had us adventuring onwards! In the retrospect the weather should have been something I looked at before booking up! 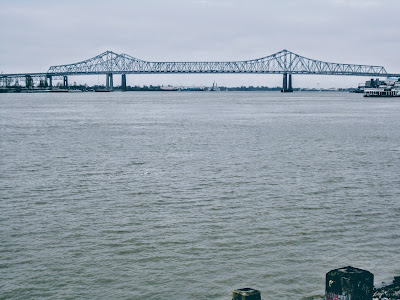 With our Beignets and coffee enjoyed at one of the popular places alongside the Mississippi River, it was for us to explore furthermore! Walking along the 'Moonwalk Riverfront Walk' gave us the opportunity to soak up that world famous New Orleans view. Even though the weather was god awful during that early part of the day, we made it our mission to get what we needed from New Orleans! The riverwalk served those views, we even saw a 'riverboat!' Were we going to take a 'riverboat' cruise along the formidable Mississippi River? No, we had planned to take a mysterious Bayou tour, but like some Voodoo curse that was taken away from due to the inclement weather. Concluding my American adventure in NOLA was the right choice to have made, the comeback will be real when life deems it to be the right time! Myself and Fiorella would enjoy our weekend with the mighty Mississippi River as our backdrop! Go!
With the Mississippi River looking magnificent, it begs the question whether I would consider returning one day in the near future? Yes! I would definitely save my penny's, making it back to the USA's Deep South so I could experience my very own New Orleans 'riverboat cruise' that would take me along the Mississippi to see a former plantation, to learn more about the complex history of the USA's Deep South river region. Back to the fun time we spent in New Orleans, was it really like Disney's 'Princess & The Frog?' Yes, I was feeling my 'Princess Tiana' fantasy with the Beignets and with the air of the French Quarter in sight! In that moment we made the best of our time in New Orleans, the weather got in the way a little but we saw lots within the French Quarter, crossing over into the Downtown to find the Garden District the next day. From our early morning departure in NYC, we made up time with our sightseeing! NOLA had more to show us, the river showed the way! NOLA, get it! 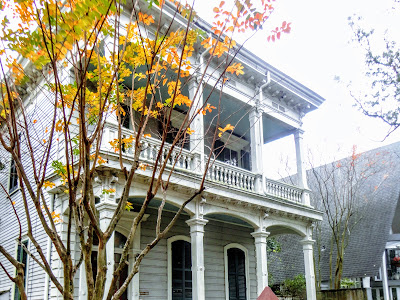 Mother nature messed up our plans, after calling to reconfirm our upcoming Bayou river tour we had those plans shelved due to the heavy rain. Fiorella did some last minute research to find the 'Garden District' a leafy part of NOLA that served us a sense of class with the rows of the large white-washed colonial houses. We got the bus from Canal Street to the 'Garden District', due to us knowing a city like Newark had prepared us for that realness! Taking our time we found some killer chocolate brownies, just spending time together away from the stresses of the airport was enough to complement of our day within New Orleans's 'Garden District'. Stopping by a darling coffee shop we people watched to the maximum, clocking my dopple-ganger who was easy on the eye! Even though our planned Bayou trip had fallen through we made the best of the situation! Those brownies were tasty!

Getting off our downtown bound bus, we had a little diversion to look in some shops, it was quite amusing! The downtown served true grit, I needed some medicine so we called upon the trusty Walgreen's that served a rather rude customer service worker. As I mentioned before, we knew the ways of certain folk, we didn't pay her rudeness any mind. Finding some food, we enjoyed our last meal shared in NOLA. So, here's to a fantastic trip that took several twists and turns. We really tried to not let the weather get us down, looking back at our time in New Orleans we certainly did our best to enjoy ourselves! Choosing an earlier flight, me and Fiorella left for the airport to take our separate flights back to NY for I had to make my early morning connection onto Orlando on the 11th of January 2013. Our New Orleans weekend was unforgettable for all the right reasons! Our Bayou trip might have been cancelled due to inclement weather, we made the best of our time! Orlando, next!