NJ: Meet Me In The Ironbound...

Where is the Ironbound? I saw a huge sign promoting Newark's Ironbound district on my way back from another early morning shift at Newark Liberty International Airport. I live within the heart of this Portuguese and Brazilian infused neighbourhood, it's the epitome of what makes me love the USA! NJ's Ironbound scene serves some of the best American food I have tasted! 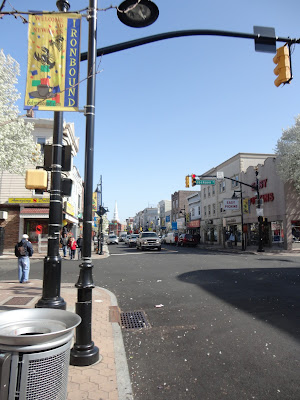 Newark's Ironbound is a short hop on the train from the Big Apple, here lies my current hometown glory. I have lived in the colourful Ironbound district for almost one year, during that time I have completely fell in love with the wide array of Brazilian and Portuguese foods and the many other treats that are on offer. The action mostly takes place on Ferry Street, at first it seemed like a foreign place when I arrived in February 2012, but once I got to know and love this New Jersey community it seemed authentically American to me! The Ironbound has a strong European and South American vibe, bringing me closer with the multicultural setting that I am used to. It's not for the faint hearted, I adore these Newark streets! I love the Ironbound muchly!

Having that European present has helped throughout my time here in Newark, NJ because the bread sold is similar and I can get Portuguese chocolate in the smaller shops on Ferry Street that tastes just like the good stuff in England. Three languages are spoken on the streets within Newark's happening Ironbound district, Spanish of a South American tone can be heard on a daily basis but not as it's spoken back on the Mainland. Portuguese can be heard in a European chat from Portugal and a lighter Brazilian tone from those folk who hail from Brazil originally. Leaving English as the third language spoken within the Ironbound, I feel very at home because English isn't the only language spoken in England. I will be living here until January 2013, but I know that I will return one day for certain! 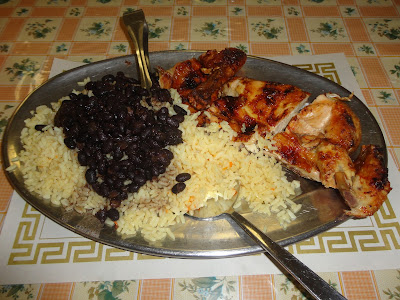 My days off are usually spent in NYC but I have lots of love for my Newark Ironbound community, going hungry is simply impossible within this part of New Jersey. I took the plunge during my first few days to discover the joys of the Brazilian and Portuguese delight of barbecue chicken that was served with rice and black beans. I fell in love with that hearty dish so much so I would walk from my Lafayette Street apartment to the boundaries with Newark Penn Station to Ferry Street BBQ for my usual 'frango' meal. Things are kept down to the line within these sorts of eateries, I constantly listen out for those Portuguese conversations that I wouldn't be able to understand but they would set the scene perfectly. Funnily enough I have lost weight since moving to Newark's Ironbound for my job with Virgin Atlantic, I know that it's down to lots of walking and keeping my energy up with good food! Yes, the good stuff stays delicious!

Newark chose me, with an industrial placement to complete as part of my degree I was given the chance to work as a Passenger Services Agent for Virgin Atlantic at Newark's Liberty International Airport. Calling the Ironbound home made it pretty simple to get the bus from Newark Penn Station for my split shifts, I have never enjoyed a place like Newark in all my times visiting the US but I wouldn't want to change this experience for the world. With good food and a selection of lively bars I needn't of bothered going into the city during my down time! Apart from Ferry Street I live for Wilson Ave, it's got a gritty sense about it and a great place to have a drink or two with the sports playing in the background, that would have to be Blitz Sports Bar on the corner of Wilson Ave and Kossuth Street. Compared to my Walt Disney internship I have experienced a whole new world for sure! Of course, Michel Teló's hit 'Ai Se Eu Te Pego' has to be playing now! Obter sua vida! I love that song a lot! 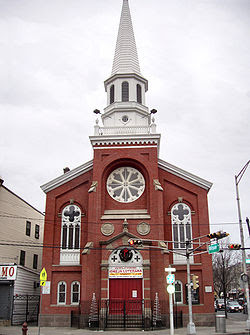 I'm not religious, nevertheless I caught a glimpse of a church that was featured in Steven Spielberg's 2005 movie "War of the Worlds". It's honestly insane to think I'm living within such a normal but amazing Newark neighbourhood, yes it does get crazy when the sunsets but that's the way she rolls. I like to refer to Newark as New York City's litter sister, she knows how to hold her own and makes up for any of NYC's overcrowding with tourists because Newark's Ironbound districts that serve something special indeed! I don't think I'll be going into this said church because I always get side-tracked by Andros Diner on Wilson Ave, his nonstop all-American diner serves the best breakfast in town! Yes I, I have to be true for the Ironbound keeps me full!

My industrial placement will be concluding in just over a week, so I look back to my time living in the Ironbound with a host of amazing memories and to believe that I would not want to change a single thing! I know that in my heart that I will return to the Ironbound in the future, for when that time will be I just do not know? From those boozy afternoons at Blitz and the occasionally jug of sangria I know that being legally allowed to drink alcohol in the US this time around resulted in some crazy times! I may have seriously slimmed down with my constant walking to and from Newark Penn Station and my manic schedule at the airport but the hearty Brazilian food keeps me going! Ferry Street keeps it real, down to the core I know that living in the Ironbound requires attitude! Sim! It's Obrigado B!

Meet Me In The Ironbound...