London called me back during my whistle-stop trip to England, I am spending the week at home in Bilston with my family. Surprising me with a brilliant day in the big smoke I was spoiled by my mum! From our West End show to a lovely walk alongside the River Thames, I was blessed! Should I make a habit of leaving the country? Lady London does it better! OK? 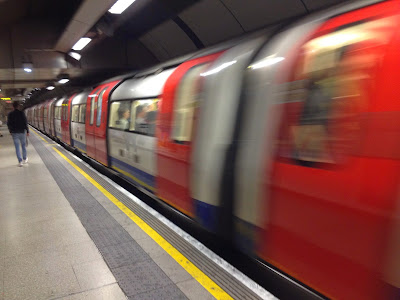 Waking before the birds me and my mum took the early morning Virgin Trains service from Wolverhampton to London Euston, I was still in a daze because after living in Newark, NJ it felt so different compared to my hometown. My short trip is only for about six days then I'm back on the VS1 to Newark, USA! Pulling into London Euston it was then time for us to go 'underground' to get to our next destination. I now have a mixed view of the London Underground due to certain events from 2007 but I know that as time goes by my fears will evaporate like steam from a kettle. The first part of our day was such a whirlwind I'm going to need a few more moments to get back to what was going on! I had been more used to taking the PATH and the NYC Subway, getting used to the London Underground for the day was a nice change, I couldn't help but notice all of those commuters! Now, did somebody say 'Mamma Mia?' Sure, London!

Back in the city of my birth it felt right to take the London Underground to Covent Garden to have a nice walk around the Piazza, I have fond memories from when I was a little boy because I was born in London and I had the opportunity to live there until I was almost six years old. Feeling the atmosphere and the vibrancy of London's Covent Garden was great, it was lovely hear British accents and it was also quite amusing to hear the bewildered American tourists as they made their mark on London town! I was having a great time working and living in America during my work placement for university but it was great to be in the city that my Newark Virgin Atlantic flights head off to from my New Jersey airport base. Enough of that chat about the United States, it was lovely to spend the day with my mum without anybody else, I'm no longer a child but I always seemed to be spoiled every now and then! It was turning out to be a busy day, sure I was ready for the next! OK go, London! 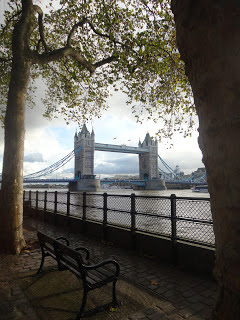 I caught a glimpse of the Tower of London as we made our way closer to the banks of the River Thames, it resonated the fact that London may not be home anymore but it still holds a special place in my heart and mind. Since I began blogging in March 2012 I don't feel ashamed to say that the photo that I captured of Tower Bridge looks mighty fine! I'm no professional blogger yet but it's become a passion of mine, a hobby for certain! The busy waters of the Thames looked ace during that chilly October afternoon. It was almost tine for us to head west for the next part of our full packed day in London. For that moment I took a quick second to appreciate London, it felt so different to me compared with New York City! No need for that business, America!

From a random angle it did get me thinking that 2012 has so far been a great year for the city of London! Now, I'm by no means the sporting type but I'm proud to say that I watched the opening of the London 2012 Olympics from my Washington, D.C hotel room. Recognising that connection with London it was something that created a sense of home, well from the respect that London will forever be the place of my birth. Plus, my American co-workers constantly refer to my home as London when in actual fact I have lived in the West Midlands for more of my life so far, it's no ones fault. Speaking of England and all of it's charms I was pleasantly surprised to see that the weather was behaving itself during our London day! Yes, the City of London looked great but I really wanted Soho! Now, next! 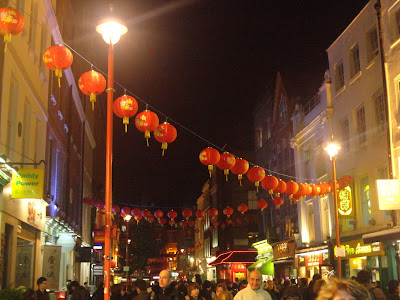 Taking our seats at the Novello Theatre in the heart of London's West End Theatreland, it was time to enjoy the musical spectacle that was 'Mamma Mia!' Inspired by the hits of that legendary Swedish pop super-group, it was an amazing show that was full of their best numbers like 'Gimme, Gimme, Gimme' and 'Dancing Queen!' Of course the whole show was as camp as Christmas, maybe it was camp as Christmas? If that was even possible? Sure! Viewing the matinee performance meant we could have some tea in London's Chinatown, located just around the corner from the West End. I had experienced a very different theatre experience when I saw the Broadway version of 'Evita' at the Marquis Theatre in the heart of New York City's Times Square, I know that the British understand when applause should be given! Yes, we know that within protocol it's always polite to show thanks to the cast! Applause for London! I love London, so!

Tea that evening after the show was lovely, London's Chinatown can get quite pricey but each time me and my mum have a theatre day in London we find somewhere that serves a fairly priced set menu. We enjoyed our Chinese meal very much, it was the end of a lovely day that we spent in London. It was time for us to make our way back to London Euston for our train back to Wolverhampton but I do remember there being a complication with the 'Tube' so we had to make a mad dash for the train but we made it just in the nick of time! From my comparisons with New York City and taking the London Underground instead of the NYC Subway I had a lovely day in London! The show was very good and getting back to Soho was equally as pleasing, it was back to Bilston to spend my remaining days with my family before my return to Newark, NJ. London, you will always be a city that I adore! London, you are timeless! Enough of that soppy talk, it's time for Bilston! Major's Chips, please!