35,000 ft in the air, I must had been somewhere over the Atlantic Ocean, seated comfortably in the Upper Class bar on-board Virgin Atlantic's Indian Princess otherwise known as G-VGOA. My first trip home to England after nine months of working at Newark's Liberty Airport as a Passenger Services Agent took an unexpected turn. The Virgin Atlantic experience was flawless! 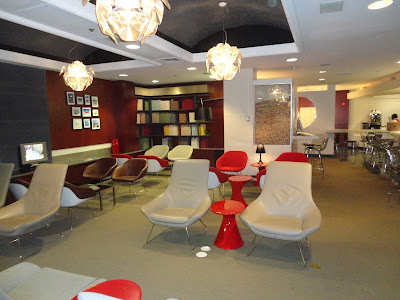 Checked into my flight at Newark Liberty International Airport's Terminal B, I made my way to the Virgin Atlantic Clubhouse for some early morning hospitality. After what seemed like a lifetime the day had finally arrived for me to fly back to England for a week! No word of a lie, I was treated like a superstar by the Lounge Concierges. I indulged in some breakfast, I had a bowl of scrumptious oatmeal with fruit and a glass of orange juice. After working with the Clubhouse team for almost one year I had made friends with the waiting staff, so I suppose it's not what you know, its definitely who you know! The Clubhouse was quite busy for the morning flight, I did my own thing and enjoyed every moment being an Upper Class passenger! I picked up my bags and headed for the TSA checkpoint to reach gate 55. Could my morning get any better? I could tell my journey home with Virgin Atlantic was going to be amazing! Yes!

The final boarding calls were made by another new gate-lead in training. Gate 55 was poised for the daily departure of their London bound VS18 flight, finally I was passenger! Being ushered to take a few minutes until I was allowed to board did plant a seed of confusion into my head but all would become clear in the end? I just wanted to board my Indian Princess aircraft bound for Mother England, but would I still be sitting in 56D? Within little under ten minutes my economy seat was changed to 12A! My new seat wasn't in the Economy cabin anymore, it was at the front of the Upper Class cabin! I would be flying high with the wealthy and possibly famous, I had witnessed some famous faces travel in Upper Class and for that reason I couldn't believe my luck! It's no secret people have differing views of Economy and other lower cabins but on that freezing morning we all shared one common destination. I'm not here for bragging rights, I want to inform and share my story! Let's buckle up VIR! 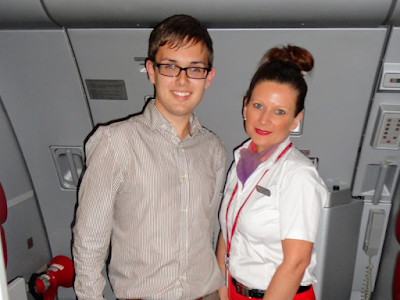 How could this be happening? After my passport was checked I made my way to my Indian Princess where I was greeted by the Flight Service Manager who was in charge of the cabin. I was welcomed on-board the aircraft with several friendly smiles and pledged to me that if there was anything that I needed, I just had to ask one of the cabin crew members throughout the course of the flight. I've always experienced top quality service during my previous Virgin Atlantic flights but this Upper Class experience would take me to new heights! I was in a state of shock, before take-off as I made my way to the Upper Class bar where I helped myself to my first glass of Champagne, a drink that I would become quite familiar with during that flight to London Heathrow Airport. I simply had to get a photo of myself stretching out on the purple fully-reclining seat. Oh, how I wanted to proclaim; "Champagne for everyone!" Yes, Newark!

Reclined, relaxed and feeling like a complete superstar I lounged in my seat and gazed at the Upper Class cabin in awe. It was time for the breakfast service to pass through the cabin, due to the layout of the Upper Class cabin there were no trolleys for everything was ordered and served to the passenger at their own table within their pod. A second breakfast? Do you really think that I was going to say no to another slice of Virgin Atlantic Upper Class hospitality? I think not! Silver service was present throughout the flight, I truly ate like a prince and enjoyed every course. I politely requested a Bacon Butty with a cup of English tea with two sugars and some milk, now if that's not a personal enough service for you then I perish the thought. I don't think I'll be travelling this way for a long time, so I wanted to enjoy every-single moment while it lasted! It was such a pleasure to see things from the other side, I am blessed to have travelled so much, but that regal experience was seamless V! 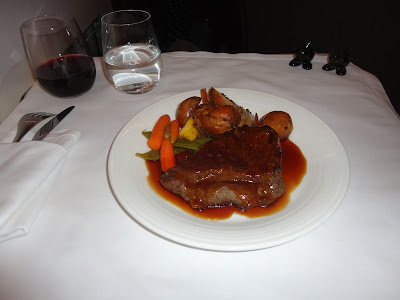 Dinner was served about three hours into the flight, a lot of the Upper Class guests had requested their Upper Class pods altered into 'bed mode' for the early morning departure meant we had to check-in at Newark Airport from 04:30 am, I was completely euphoric, so sleep wasn't possible for me no matter how hard I tried to catch a few z's. I dined from the finest bone china plates and used silver cutlery as I enjoyed a flavoursome cheese-board accompanied by a deep glass of Australian Rioja wine that complemented the Stilton and crackers perfectly. Moving through to the main course I chose a sirloin of beef which was accompanied with garden vegetables in a red wine sauce, enough red wine? No! The steak melted in my mouth, that airplane food was exquisite! It was a shock to my system, I had never dined in such a opulent setting on-board an aircraft. Yes, I was loving every moment VS!

My entire flight could only be classed as mind-blowing, I couldn't have asked for anything more than what I received on-board my London bound flight. I was comfortable and extremely well catered for, I made use of the Upper Class bar but always remained classy because nobody wants to be trashy at 36,000ft in the skies! My Virgin Atlantic Cabin Crew were extremely attentive and polite, nothing was ever too much trouble. From that point of view it has only made me want to pursue my dream to be a flight attendant. From the moment I arrived at Newark Airport right through to my express disembarkation I could not of faulted the high level of customer service and professionalism made by the Virgin Atlantic Airways Ground Crew and Cabin Crew! I was reclined all the way from Newark Liberty to London Heathrow with several intervals at the Upper Class bar, where I chatted with the Upper Class Cabin Crew. I could not ask for a more relaxing and comfortable flight! Oh, home!