NYC: An Empire State of Mind!

NYC, there's no other place like it! Bright lights and that big city feeling are all rolled into one. So many things to see and do, where does one begin? A city so big it should be declared a state in its own right, this gargantuan city keeps on giving me more! I am seriously living a dream here in the East Coast of the U.S.A! New York City, show me what you've got! NYC, I'm ready for more! 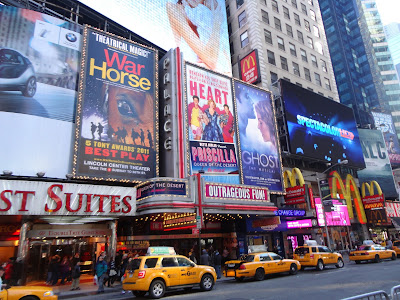 For true, New York City has many different sides, she's multi-talented! I currently have the immense privilege to live very close to this mesmerising place! The approach to Times Square by foot is out-of-this-word, there's just no other way to explain the bright lights and the constant sea of hustle and bustle as New York City's epicentre loves life as one! I just didn't think this place was real, well it's very real and is one place in New York City that gave me an 'Empire State of Mind!' This part of NYC is a kaleidoscope of colour, beaming down throughout the streets that surround Time Square. Yes, it's a tourists paradise, its no secret that everyone wants to be part of the NYC vibe! Times Square is famous for its towering adverts that look amazing after sunset. Yes, Times Square was the first place that I visited in New York City, it was one place that solidified that I was in NYC, NY! O, moderation would be the key for T.S.

Times Square's also home to NYC's Theatre-land, London has the 'West End' but NYC has 'Broadway!' Shows like 'Priscilla Queen of the Desert' and 'Evita' are just two of the many shows that are currently wowing audiences at the moment. Like London's 'West End', Broadway is constantly unveiling new musicals, for 2014 Aladdin and Kinky Boots will be premiering! Word on the street is that Cyndi Lauper will be involved with the new Kinky Boots Musical production! I have a sickly feeling that I won't be able to see half of these new upcoming new shows, but I'm going to make damn sure I get to at least one Broadway show this year! It's true that Times Square brings it big, giving me a showstopper during my first visit! Call me crazy, surely NYC isn't all about bright lights and craziness? Broadway, I'll be back! I know that I have enough time to see that one and only show, those tickets are not cheap! New York City, I could get selfish with you! The West End will return because NY's Broadway is for now. 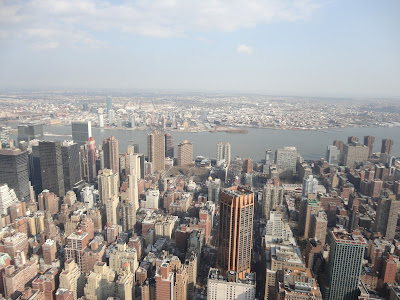 Now, I don't have a head for heights but that didn't stop me seeing a view from up above! The Empire State Building offered me a bird's eye view of New York City and it only costs $25.00. The Empire State Building is located close to New York City's Penn Station and 6th Avenue, this iconic landmark made me weak at the knees. I'm not fond of heights but was a once in a lifetime experience that simply had to be done. Taking on the Empire State Building on a clear afternoon we had maximum exposure to all of the sites, we had a bird's eye view of the Statue of Liberty! It was quite bizarre because from the top the yellow taxi cabs all looked like busy little ants zipping through the streets! Reuniting my Disney pal and former colleague was amazing, me and Ritika took on that skyscraper without thinking about the dizzying heights! So far I have been blessed, NYC has showed me so much! At times its been crazy, its all worked out!

Picture the scene that's captured above for NYC is a maze of streets and neighbourhoods that challenge each and every local and tourist alike. Like any provincial city that's got the world looking at its every move New York City keeps it real just about every day of the week, well multiple that by fifty two because NYC is nonstop! For me grabbing a bite to eat should never feel like a task! Taking the subway downtown from the tourist traps to Chinatown NYC for an unforgettable sight, I found out for myself that there's so much more to that Oriental part of town! I had no idea what Vietnamese food was! The movies had lied to me, looking past that shade I was living within NYC's Oriental corner! I strayed away from the guide book by taking a chance on Downtown because New York City keeps it real, there's just nothing that this captivating and energetic city hides from its residences and visitors! Yes, I love New York City with all my heart, there's nowhere else I would rather be right now! 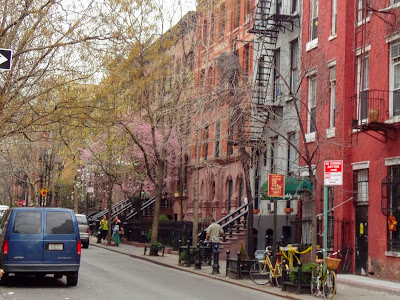 Those bright lights and tourists get on my nerves sometimes, I have adored jumping on the PATH train from Newark Penn Station on my off days without any plans for my day ahead in NYC. Telling lies I knew where Christopher Street was after I took some travel advice from one of my colleagues shortly after arriving into Newark. The kitsch streets of Greenwich Village and the near by Christopher Street area were just darling! I have been so blessed, I enjoyed my spring day getting perfectly lost in order to find Bleecker Street. Not needed the NYC Subway I stumbled upon NYU, it reminded me that I had a friend who's completing a very specialised qualification at that university. Getting away from the tourist appropriate areas has allowed me to learn more about NYC hidden secrets, I live to find more things out about the Village's. It wasn't just architecture that I got lost in, those blue eyes had me standing frozen!

This summer time has taken me to places like Las Vegas but returning to Christopher Street gave me the right kind of happiness, that was for NYC Pride 2012! Attending my first Pride March in NYC had my everlasting love on lock for this North American super-city! I lived for that day, it opened my eyes to so much more, bringing me closer with new friends that have only added to my time here. I don't have work on my mind when I'm in the city, its my happy place to explore and to get lost in all the right places. Allow my feet to take me down a different path, my faith has been given to NYC for it to take my hand. I remember not having any sleep, getting on the PATH train over to West Village because I wanted to find something new, really my heart always felt light whilst I was in that rainbow styled part of town. NYC, you've got me doing things and going to places that I could have only dreamed about before my placement. The subway was cool but the PATH was my key to the city! 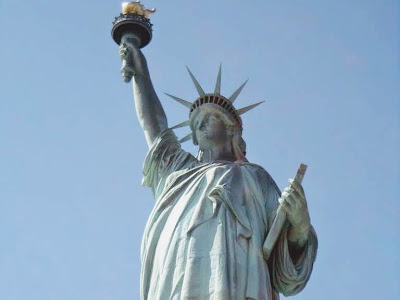 Perched on Liberty Island is the world renowned Statue of Liberty. It's located in between New York and New Jersey surrounded around the Hudson River. That formidable Lady of Liberty waves her torch over the Hudson River, guiding the many vessels that cross the waters throughout the night. Honestly, the Lady of Liberty is a formidable figure, in my opinion she looks every inch the 'Glamazon'. Just across the water is Ellis Island, once home to New York City's largest Immigration screening centre. Ellis Island holds many exhibits that depict the struggles and journeys that people of the past made to reach the United States of America. I understood how New York has developed into a city that is such a melting pot of sub-cultures and variety making NYC a tough place to find the best international food and culture in one place! That Battery Park had me thinking all kinds of blogging thoughts in March 2012! Yes, L!

Entering a film location for one of the 1980's most iconic films that was based in the city. Madonna's breakthrough film 'Desperately Seeking Susan' was created for me in real-time! Battery Park, a place that made its way into Madonna's movie that painted its background around Battery Park, that's why the film in-question looks sensational. I loved my afternoon at Battery Park, kidding myself that Madge would rock up to the park and be waiting for her date but life is life so I didn't see Susan. Forget Hyde Park because that Downtown district was only a heartbeat away from the shores of the Hudson River. New York City has turned my life upside down, it gives me a place to run to on my days because Newark is downright down shady! Keep it classy NYC, or keep it whatever you want to darling! I have five months remaining, my Industrial Placement will allow me to spend just enough time but I'll always have an 'Empire State of Mind!' Get it together, Brooklyn needs to be bossed! Go!