What is Philadelphia? Where is it? Some might call it a brand of cream cheese but I'm going to recognise it as a great city. Located in the state of Pennsylvania, another new city awaited my discovery. My days off are precious so I want to use them to the best of my advantage, a nice bit of state hopping is always a great choice. Show me what you got Philadelphia! Go, Philly! Go! 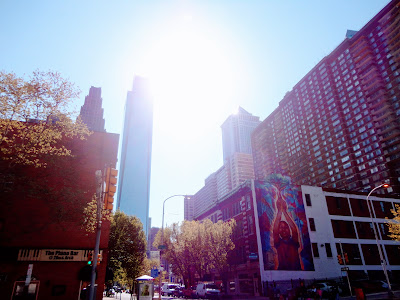 Yes, I had an idea what I thought Philadelphia would have looked like, I imagined it to look quite colonial with a raw attitude. Parts of Philadelphia fitted that bill but other parts certainly didn't, nevertheless my lasting impressions were positive. One thing that did strike me about this city was the contrast between tourist appropriate areas and not so polished ones. A definite colonial vibe could be felt as I discovered the Old City, more about that soon. My mission was to visit the areas that weren't meant for tourists, because I find that's much more fun! My only knowledge of Philadelphia was the Philly Cheese Steak sandwich that I ate when I was at Orlando International Airport in September 2011. Throughout my day in Philadelphia I saw many extremes but found each of them endearing even the ratchet tones. I look for historical qualities in a place but the devil that sits on my shoulder looks for urban realness. B!

Enough of the critical chat I had a super day in Philadelphia, it was super easy to get to from Newark's Penn Station by using NJ Transit and the SEPTA train. Philadelphia's got attitude for sure, so I needed to keep my wits about me. I live in Newark so I'm accustomed to seeing some crazy things going on around me, I'm definitely developing a fierce personality to fit in with these formidable places that I'm experiencing! Philadelphia was waiting for me, I feel that places that aren't completely squeaky clean should be given a chance at least once because like people having different personalities I would say this notion should apply to cities like Philadelphia? Logan Square was cool and I really appreciated the vibe of Philly's green spaces. Philadelphia is a city of museums and art galleries but I wasn't going to see those places. I covered some serious pavement that day in Philly because I didn't plan on staying overnight. It'll happen soo enough, I'm still new to this American travel lark! 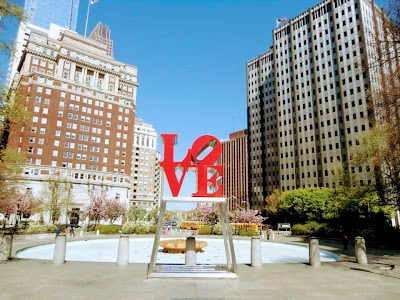 From the second that I stepped off my train at 30th St. Station the walking began! I had broke away from New Jersey and New York to start my crusade of visiting new states that I hadn't previously been to before. I realised that Philadelphia's a walking friendly city, so much so I felt no need to burden my wallet with the charge of public transportation. With the sun-shining my Pennsylvania adventure carried on. From regal and grand museums to the site of snoozing vagrants, a sight that I didn't really care to see. The 'LOVE' statue stood in the perfect place with the blue sky setting the perfect vista. South Penn Square introduced itself in a quirky fashion, Philly's Center City showed me its inner core so well! I popped to McDonald's to grab a bite and I even witnessed some crazies go about their business whilst I ate my breakfast. Remembering South Penn Square, standing next to City Hall served its truth for certain! Slay, PHL!

Like I mentioned before I'm not a person who cares to trudge around art galleries and museums but I could have been easily persuaded during my time in Philadelphia. The mile long road that leads to Washington Square gives this city a feeling of cohesion and international kinship. I especially loved seeing the flags of the United Kingdom and Turkey as they are two places I won't be visiting for a long while yet. I actually enjoyed being a part of the action and felt that I could relate to this quite a lot, after all it was only impulse that brought me to this city for that day. Rewinding the clock back to a distant time I checked out the Independence National Historic Park to be acquainted with Philly's past, learning about the Liberty Bell that chimed around 1751 that outlawed slavery in the United States of America. Freedom seems to be a popular theme in Philadelphia for I did love the feeling of Washington Square Park. Knowing more about Philly enabled me to appreciate things. 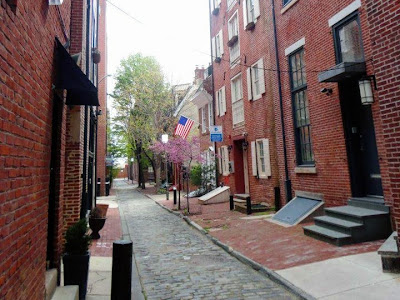 As I made my way through the different districts the mood changed, the people on the streets changed quite a lot also. I found this change quite refreshing so that lightened my view of this city. The Old City provided some really interesting and quaint houses that screamed the British had made themselves comfortable here in Philly at one point during the city's founding times. Captured to the right I wasn't seeing American style condominiums, no it was very British looking indeed! A trendy vibe transcended upon this area, also it was apparent that tourists definitely flock to this area! I did notice that the local's of Philadelphia's Old City didn't appreciate the high presence of cameras, beggars can't be choosers! I didn't totally get to the waters of Penn's Landing during my first Philly, a second chance would prevail in the near future. I was hungry but in actual I no clue as to where the Cheesesteaks were good!

Looking back from the moment I reached the decrepit looking outskirts of this endearing city I don't quite know what pulled it out the bag for me? I do know that each parts of Philadelphia's Center City  gave me a different incite to city life in this Pennsylvanian capital. From the main shopping streets which were not quite tourist ready to the squeaky clean borders of the Old City, I sensed that a certain vibe makes me feel like I will be going back to Philadelphia soon enough. I even found a little magazine and bookshop that sold my Attitude Magazines, a Gay themed publication for the modern Gay man that is mainly published in England. I managed to get two issues that I would have missed from home, proving the perfect reading material for the train journey back to Newark's Penn Station. Philly was truly something indeed! Getting out of NJ and NY was just the thing that I needed! Will I go back to Philadelphia? I can't answer that question right now, maybe just maybe? PA, I'm done B!